I bought a Remarkable 2. I’ve been using it for a few days now, and I think:

Why I Wanted One

Thanks to a Hiring referral bonus (thank you to ENSEK for the bonus, and to Courtney for passing her probation!) I found myself able to justify a present I had wanted for some time - a Remarkable tablet. I wanted one to resolve a number of personal and work challenges:

Plus, who doesn’t love a new toy? “Extra” money in hand, I quickly pre-ordered the upcoming 2nd iteration before the cold logic of life insisted I spend it on something mundane, and settled down to wait.

Setup was simple and easy to follow; create your account, enter the code, done. The Remarkable App was similarly easy to install on my phone, and immediately started syncing once I’d set it up.

In general, the UI follows a simple pattern. A couple of the more advanced actions (like reordering the pages in a notebook) weren’t so easy to figure out, but the online help is well laid out and easy to find.

All told, skim reading the tutorial a little too enthusiastically, I was ready to go after 5 minutes of account creation and setup. The device arrived with 40% battery so I could get going immediately and start testing it out!

First of all, Accessibility. Being left handed, writing isn’t always the joy it could be, so I was interested to see what they had done to help. I was very pleased with the overall left handed support - the device has a left-handed mode which moves the toolbar to the right hand side of the screen, which is fantastic.

I still fell foul of accidental button pressing occasionally. With the toolbar on the right, the exit “x” is shifted to the top left; if like me you have the classic left-handed “hook hand” position, you’ll find yourself having to clumsily avoid it when writing at the top of the page. Frustrating, but it’s hard to see what they could have done to avoid it.

Writing in general is really nice - the marker flows across the screen smoothly and there’s a satisfying scritch as you write. I’ve mostly used the Mechanical Pencil setting so far as it has the clearest output for writing (for me). The Fine Liner is almost identical. I’ve played around with the other settings a bit, I’ve included some images of test pages below. As a left hander it was a novel experience being able to “write” with a Calligraphy Pen and have it turn out legible! 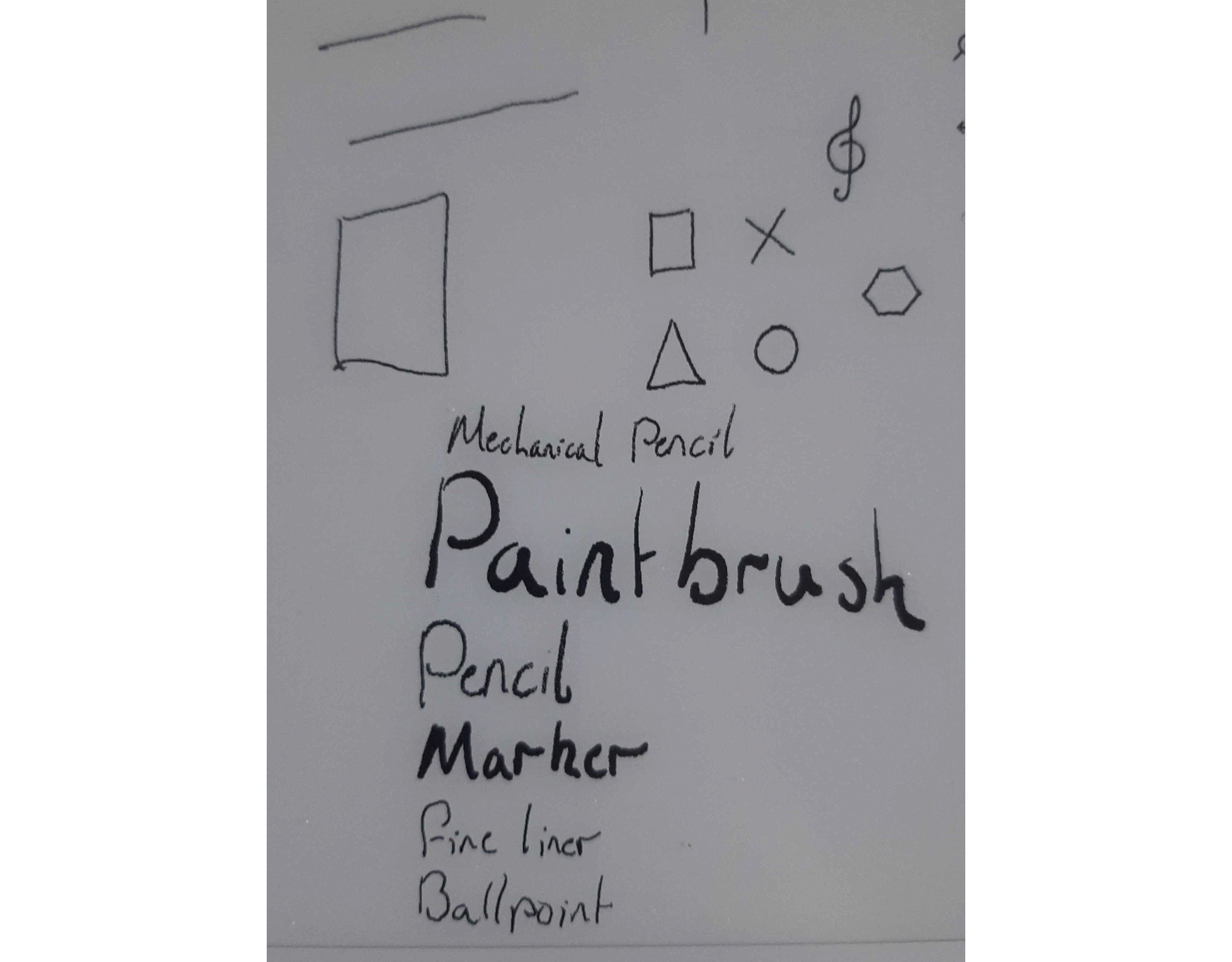 The normal Pencil is an interesting experience - the screen does respond to different strengths and pencil angles, but sometimes in an unexpected manner - sometimes I got a thick line as if I was shading with the side of the nib when I was expecting a clear fine line. I was able to shade in different strengths effectively, but when drawing a single line it appeared that you could only start light and get heavier - it doesn’t appear to allow you to go from heavy to light.

I was impressed with how the screen appears to take into account how long you have been shading an area; going over the same section with the same strength for a longer period of time appeared to make that area progressively darker, allowing an impressive level of control. 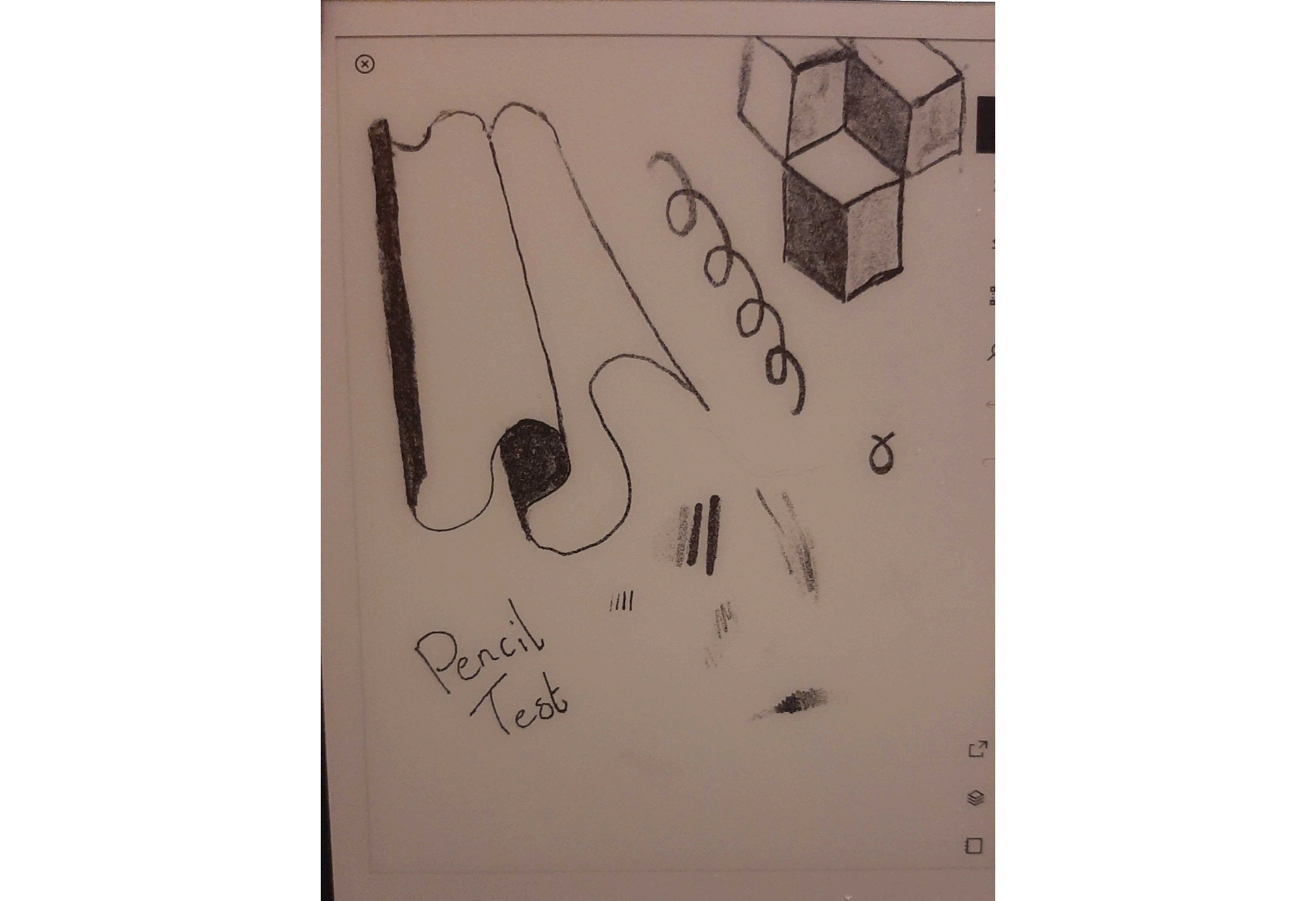 The Selection mechanism is lovely and straightforward - you can move, resize, copy and cut selections, and pasting them into other pages or notebooks is simple - and the built-in layering functionality on every page is really handy for more complicated sketches.

Having played around with the input mechanisms, I tested one of the features I’d been really looking forward to: OCR. There’s a side by side comparison below - it appeared to be able to handle my handwriting with minimal issues, although I wasn’t writing at full speed. 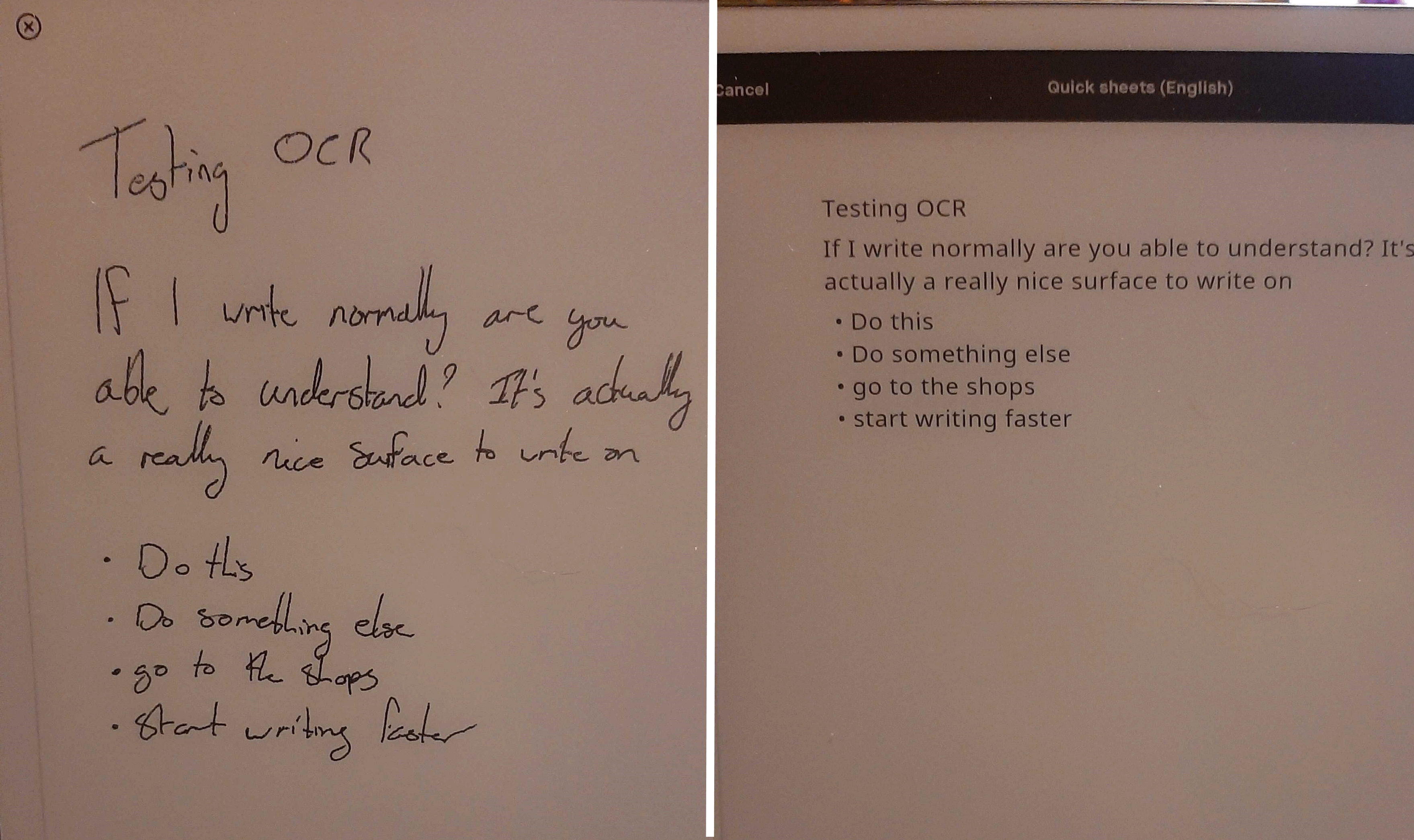 “Fantastic!”, I thought… then met my first (and only real) great disappointment. While you can convert handwriting to text, having done so you can only email somewhere else - you can’t convert and store on the device.

This is a major pain - because of this, it means the search is effectively useless - I can’t search for a term in my notes, because the search can only find text. I have no doubt that it’s already been submitted, but I put in a feature request for either an OCR search (hard) or a local convert to text (should be a lot easier).

Moving on from that disappointment, a little bit more about Pages, Notebooks, and Folders, and the tools available within them.

Pages are organised into Notebooks, Notebooks can be organised into Folders, but you don’t have to use them. You can have as much of a folder hierarchy as you like. You can’t create a page outside of a notebook, but there is a “Quick Sheets” notebook which exists by default and can’t be deleted, for random notes and scrawlings that you don’t intend to keep.

You can duplicate, delete, and reorder pages - all tools that I’m pleased to see, as it will mean that I can add things in wanton order as they occur to me, assemble my notes on subtopics within a single notebook, and maintain my own contents page(s).

My second (minor) disappointment was the templates. The template concept is great, but there are a few odd quirks and hiccups.

Nominally, there’s one template per notebook, But you can change the template in use on any one page using the layers tool on that page, and it won’t impact any other existing pages. Be careful, though - if you create a new page within that notebook, the new page copies the template of the page you created it on, which to me seems really odd - there doesn’t appear to be a notebook-level template setting that is locally overridden as required.

There’s no official way to add your own templates, which is annoying, though I’m playing with workarounds for that. I found an article explaining a way of SSHing onto the device to load your own templates but I’ll be leaving that one well alone for now!

Finally, the left-handed support falls down a bit here - as you can see in the image below, the “Deadline” column that would be fine in right-handed mode is obscured by the toolbar in left-handed mode - the template doesn’t account for the location of the toolbar, which is frustrating.

Overall, despite the disappointments I’m still at a 7.5/10, possibly an 8. If the OCR/search downfall can be sorted out I would absolutely forgive the other small misgivings and give it a 9.5/10, but it’s frustrating that such an obviously useful feature has been left out so far.

Is it worth the price tag? Even without the search it’s a really lovely piece of technology, but whether it’s worth it for what’s essentially just a very nice but very expensive digital notebook becomes a rather more subjective decision as a result.

For me, it’s worth it - it’s already driven me to write down more of my thoughts and arrange what I know more than I’ve managed in years.

For you? Well, I hope I’ve helped you in that decision.